Christianity is the religious practice based on the teachings of Jesus Christ, who taught his disciples in the Holy Land of Palestine, during the reign of the Roman Emperor, Tiberius. After his death, the religion has spread worldwide.

Before reading more keep register at MeraVyaah.com and find a soulmate.

In India, Christianity is the third largest religion after Hinduism and Islam. Though Christians are less in numbers, but has a deep impact on the Indian Culture. 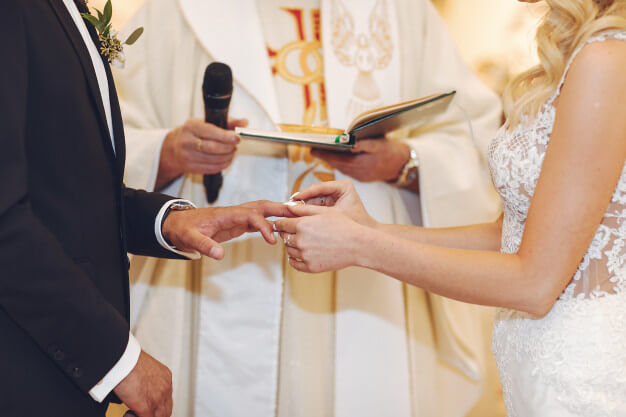 The bridal shower is a party hosted by the bride’s female friends. It is mainly a get together of the bride & her friends to celebrate the most important event of the bride called marriage. It is the enjoyable time for the bride and her friends. They sing, dance, and play games the whole night. This ritual is celebrated to relax the bride.

The friends present gifts to the bride. The bride serves a cake with a thimble hidden inside. According to the tradition, the bride’s friend who gets the slice of cake with the thimble in it will be the blessed to be tied in the nuptial knots soon.

Similar to the bridal shower, groom also celebrates Bachelor Party. It is called a stag party hosted by the groom some days prior to the marriage. Usually this is a most enjoyable & wildest party the groom can expect as a bachelor. It is customary to raise a toast before the drinking begins in earnest. Groom mostly celebrated this party to have fun and enjoyment with his close friends.

On the day of the wedding, groom sends decorated Car to pick the bride to accompany him to the church for the wedding ritual. On reaching Church, he welcomed the bride with a kiss on either cheek and presented her a bouquet of beautiful flowers.

Once the bride arrives the church, and she is received by the groom, they slowly & elegantly walk towards the main hall where the priest stands for the special wedding prayer. The priest then greets them and offers his best wishes. The wedding prayers begin with hymns and selected readings from the Bible. The priest then delivers the spiritual lecture laying the importance of the sanctity of marriage.

After that bride & groom exchange of the wedding rings.

The wedding ceremony comes to an end with the final blessing of the priest.

Towards the end, Guest showers their blessings on the newly wedded couple.

The last formality is the couple then signs the register and walk down Church passage, arm in arm.

It is a post wedding ritual where the newlywed couple enters the venue and are welcomed by all the guests with a shower of confetti (small pieces of coloured paper traditionally thrown over a bride and bridegroom by their wedding guests after the marriage ceremony has taken place). Newly wed couple must cut the wedding cake and feed each a bite of the first slice. Parents or friends propose a toast in honor of the couple. The reception is mostly celebrated with dance and dinner party. In many functions, a live band performs, and everybody dances to the tune of the band.

Thank you for reading article on Christian Wedding Ceremony, Further, if you want to add something then do comment below.

This website is strictly for matrimonial purpose only and not a dating website and should not be used for posting obscene material.
Copyright Â© 2018-2020 Meravyaah.com - All Rights Reserved.